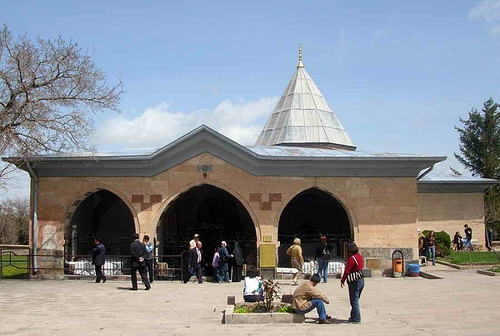 This town gets its name from Haci Bektaş-i Veli, who was born in the 13th century in Khorassan, on the border with modern day Iran. Haci Bektaş recieved his earliest education from Ahmet Yesevi, a leaned thinker of that time.

Hacı Bektaş followed the Turkish migration routes from East to West, to arrive in Anatolia where he settled in Hacimköy near Sulucakarahöyük.
His arrival coincided with the political and economic deterioation of the Anatolian Seljuk state, during which time there was also a collapse in central authority. During this time Haci Bektaş travelled from city to city and village to village to promote Turkish unity. He made an effort to unite Turkish customs and culture with the Islamic faith, and worked hard to protect the Turkish language and culture from foreign influence and degeneration.
In the three court yarded complex housing the tombs of Haci Bektaş-i Veli and Balım Sultan, there is also a mosque, bath house, soup kitchen, laundry, guest house, plaza house and several fountains.